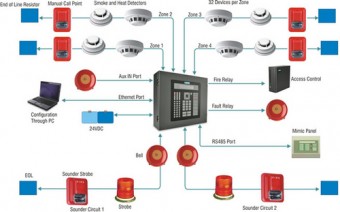 Due to financial constraints and capacity capabilities, it is necessary to install several detectors that guard one or more adjacent rooms in one line. Combined fire detectors form a group, also called zone or ray set. Thus, when one of the detectors passes in alarm mode, the mode of operation of the whole group changes, as the fire control panel is unable to detect which of all the automatic fire detectors mounted in the line has worked. These systems are called conventional and at this stage are the most common type of fire detection systems used. Here there is no individual addressing (recognition) of one-line fire detectors. In order to specify the particular detector triggered by the alarm, parallel light signaling devices are installed. Conventional systems are some reasonable low-budget solutions, although they have their drawbacks: each line only meets one zone; it is possible that in the alarm signal on the control panel there is no indication of the built-in fire detector; it is necessary to divide the lines of automatic fire detectors from manual and relatively higher wiring costs. Moreover, the detectors have only two baseline states - normal and alarm (equivalent to fire detection), which limits the achievement of a better "detection capability / fake level" ratio, and the detection of one detector, in many systems of this type , results in damage or incapacity of the whole line.